Cartoon faced Chris Pine (Star Trek) and walking muscle Tom Hardy (Warrior, Inception) are two highly trained CIA assassins who fall for the same woman, Reese (the jaw) Witherspoon, and soon find their friendship put to the test as they attempt to sabotage one another’s chances.  Meanwhile a terrorist who survived an earlier mission is hell-bent on revenge. 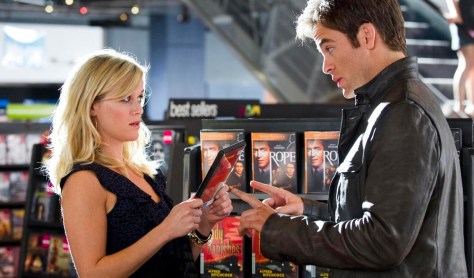 Director McG (Terminator Salvation, Charles Angeles) has crafted an immediately ‘fun’ concept here with a likable cast and plenty of humour, romance and action.  Although his flair for pop-corn thrillers livens up the movie with some beautiful sets, slick cars and cool gadgets, he seems most at home with the entertaining love triangle.  Witherspoon is equal parts sexy and ditsy and has always been a favourite, whilst the two male leads are perfectly cast; Hardy playing the more in-touch-with-his-feelings type, whilst Pine is the charismatic womanizer with all the right moves.  At times the action, which should have been the highlight, seemed forced and to be honest distracting – McG’s approach making me feel like the movie had been put into fast forward every time something kicked off.  Add to this a clichéd villain that was all but an afterthought – and this often felt like a movie playing a tug of war with its own ideas.

So as you can probably imagine, it’s the banter between the three principal players where this shines (the dialogue positively bouncing off the screen), and it was still very entertaining.  Just a shame McG felt the need to pad it all out with a weak terrorist subplot and badly handled action.

1 thought on “This Means War”