The first Sherlock Homes movie I really enjoyed, as although looking back the casting of Robert Downey Jr didn’t seem obvious at first, I was pleased to see his chameleon-like acting skills suited the part immensely, helped by an equally adept Jude Law as Dr Watson.  So sitting down to another escapade with this likable duo was easy.  This one has Holmes and Watson up against their greatest ever foe, Professor Moriarty (a brilliant Jared Harris) who seems behind a series of bombings and assassination attempts.  Holmes leaps into action to piece the clues together and sets forth on an adventure that takes him from London to Paris and many other locales in an attempt to prevent a global catastrophe. 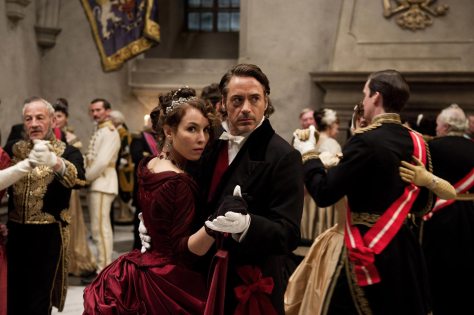 Downey Jr, easily one of my favourite actors is on brilliant form as Holmes, and his quips, excentric behaviour and plethora of increasingly bizarre disguises is a joy to behold.  Law is somewhat more subdued this time around but still manages to spar with his on-screen buddy amicably.  Joining the cast is The Girl With The Dragon Tattoo star Noomi Rapace who makes for a feisty action heroine.  Yet above all else this is director Guy Ritchie’s gig with some quite remarkable visual flourishes that enhance the wealth of action sequences and really stamp his identity on the movie.  He’s come a long way since Lock, Stock & Two Smoking Barrels and has grown into a director with real intelligence and  imagination.

The story does get a tad confusing and over-complicated at times, and the comedy is laid on a touch thick for my liking.  Yet as a follow-up to an already impressive adaptation of Sir Arthur Conan Doyle’s literary icon – this is every bit as good as that movie was, and in Moriarty has a villain that actually gives Holmes a run for his money this time around.

1 thought on “Sherlock Holmes: A Game Of Shadows”