I am a big fan of Leonardo DiCaprio, with some of my favourite movies having stared this gifted actor.  Now when you think of what leading ladies he has been pared with, you’d be forgiven for immediately coming up with Kate Winslet and their on-screen love affair in James Cameron’s Titanic.  Now for the second time, they are paired again as Frank and April Wheeler, who at first glance seem the perfect suburban couple.  They have the big house, the lovely children, the nice neighbours and the perfect existence.  Yet bubbling under the surface is resentment and despair.  Both yearn for something more, something their relationship isn’t giving them and so decide they are going to give up everything and move to Paris. 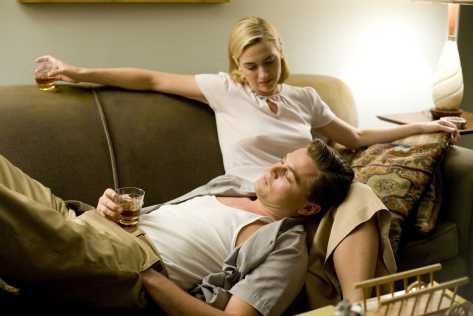 Based on the novel by Richard Yates and directed by Sam Mendes, ex-husband of Kate Winslet … this like his earlier American Beauty is again holding a mirror up to the suburban dream (albeit in the 50s), with all the cracks and unhappiness that might lurk in the shadows.  It made me think of David Lynch, how his Blue Velvet and Twin Peaks showed us that not all is perfect in that picket-fence image, and although this movie doesn’t delve into Lynch territory freakiness, it felt similar and in some ways had the same atmosphere of impending doom.  DiCaprio again is solid and believable, at times typical American blue-collar, other times a ticking time bomb.  Winslet whilst equally as good sports a somewhat sketchy American accent that distracted me and her character came across less sympathetic.  Also at times the arguing felt forced and unnatural, almost like they were playing it up to hammer home that this couple don’t get a long – but it wasn’t necessary.

As an exploration of a relationship however, I found this absorbing, helped by good support from the likes of Kathy Bates and Boardwalk Empire’s Michael Shannon, and as a vehicle to reunite Winslet & DiCaprio, this was a good alternative to the ice berg movie.