I went through a phase in the nineties of being really into the films of Woody Allen, and none more so than this 1977 Oscar-winning relationship comedy.  Allen plays struggling stand-up comedienne Alvy Singer who through the movie narrates the on off romance he has with Annie (Diane Keaton), a carefree, happy-go-lucky nightclub singer who Alvy at times adores, is annoyed by, and also finds irresistible … and it’s not hard to see why. 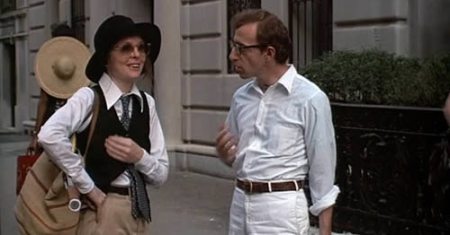 The movie is not your straight forward boy-meets-girl love story however, but more a satirical look at a very believable relationship, through its ups and downs, break-ups, make-ups and everything in between.  For me it remains Woody Allen’s most perfectly written, cleverly played out and engrossing movie he’s made.  Some I think don’t always get Allen’s brand of angst-ridden, nervous humour, and although it’s rarely laugh-out-loud, it has a charm to it he’s carried throughout his career, which is one reason why he still manages to turn critics heads and get rave reviews to this day (Midnight In Paris, for example).  Here though he’s at his inventive best, offering to the camera anecdotes, inventive use of split-screen, animation and just plain clever-ass dialogue that references everything from Groucho Marx to the JFK assassination, and kept this viewer smiling.  Performances are also first class, especially from a captivating Keaton, who sparks brilliantly off Allen’s at times motor-mouthed, scatter-shot version of himself.  The movie has been cited as being semi-autobiographical, an easy thing to believe considering Keaton & Allen’s real-life relationship, that spawned a succesful on-screen partnership until they parted ways years later.

Annie Hall for me is the best movie ever made about a single relationship, and captures the complexity, the fun and the sadness just right.  One of my all-time favourite movies, and watching it again was like visiting an old friend.

This recently released Blu-ray from MGM however, is a disappointment.  The picture is serviceable at best (although this is a very natural looking movie so vivid colours and razor-sharp image quality was never going to happen) and the audio has some minor lip-sync issues if you’re paying close enough attention.  Thankfully there doesn’t seem any post-processing work done and grain looks intact.  Extra features?  If you call the theatrical trailer an extra feature, then sorry … that’s all you’re getting.  A shame considering this movie’s legacy – where’s the documentaries, the interviews?  Very poor indeed.