Director Luc Besson may be more of a producer these days, responsible for franchises like The Transporter and District 13, but back in the nineties, he was responsible for some of the coolest movies ever made, most notably Leon.  Following the success of that thriller that launched the career of Natalie Portman, we have this much hyped sci-fi epic starring Bruce Willis and an at the time unknown Milla Jovovich. 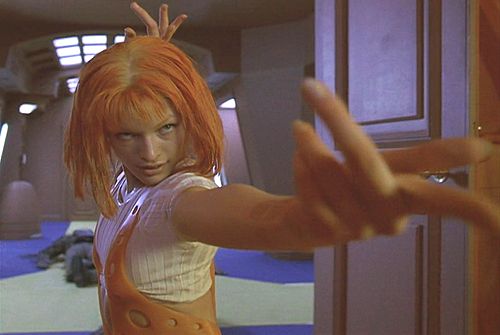 Inspired by the art of Jean-Claude Mezieres and based on a story Besson had conceived as a teenager, this tells of a fable threat to mankind, of absolute evil that comes to earth every five thousand years, and for centuries a race of aliens have protected earth by bringing together the four elements, wind, earth, fire, water followed by a fifth, the supreme being.  In the 23rd century when the threat comes again, and mankind have no understanding of what they can do, a fifth element in the shape of Milla Jovovich’s Leeloo is brought to earth, and stumbles upon a cab driver (Willis) who is soon caught up on saving mankind.  On villanous duty and hot off his brilliant turn in the aforementioned Leon is Gary Oldman as Zorg, an arms dealer and general scumbag who seems to be in cahoots with the evil force and aims to stop the five elements from coming together.

This story whilst well written is a little simplistic agreed, and characters on a whole are very cartoonish and a little absurd – but this suits the very stylised and comic-book feel to the movie and enhanced my enjoyment of what would otherwise be a fairly by the numbers affair.  The action when it comes is also first-rate with Besson’s French new-wave background making every gunfight or flying cab chase a joy to behold – and who can forget a sexy, bandaged Milla Jovavich jumping off a skyscraper ledge?

Luc Besson’s vision stands alone in the sci-fi world, as portraying a futuristic New York not as a neon lit, rain-swept hell hole (see Los Angeles in Blade Runner) but a bright, colourful and vibrant city full of personality.  The look here is clearly the biggest selling factor, and still cutting-edge CGI effects with superb set-design and costumes by Jean-Paul Gaultier, combined with a beautiful score by Eric Serra makes for a truly jaw-dropping experience.  It’s also one that excels on Blu-ray with care taken to remaster this movie to look truly eye-popping and colourful.  Detail is very high with no obvious grain reduction or edge enhancement evident.  A flagship title then for the format I’d say.  Negatives are more of a matter of taste, with Chris Tucker’s flamboyant DJ, Ruby Rodd being one irritating example for many, although I actually enjoyed his performance, and much of the comedy is very bizarre and perhaps a little too French.  Also it’s one of those movies that starts very well, gets a bit bogged down with plot in the middle, then picks up again towards the end.  But taken as a whole, this remains one of the most stylish and unique examples of the sci-fi genre, and is still a must see.

1 thought on “The Fifth Element”