This has to be one of the most memorable and timeless coming of age love stories ever made.  A clear favourite amongst the female crowd and anyone with a love of 80s shmaltz, this follows the story of teenage girl ‘Baby’ (Jennifer Grey) who during a summer vacation to an exclusive resort, falls for bad-boy dance instructor Johnny (Patrick Swayze) and subsequently experiences her own sexual awakening whilst breaking the heart of her Mother and Father.  But this isn’t really about teenage rebellion, but more about the chemistry between the two leads, the charming humour of her dance lessons, the annoying would-be suitors, the tone-deaf sister and the set-in-his ways father.  And the music is just fantastic, taking tracks from some of the most memorable 60s rock ‘n’ roll songs to create a truly sexy and uplifting feel good classic. 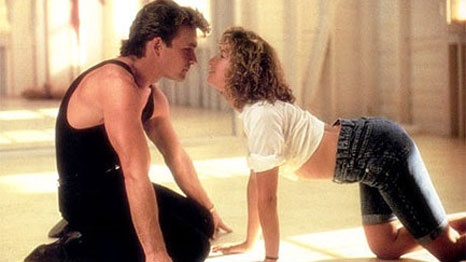 Jennifer Grey may not have gone onto the same career as Swayze, but beyond her limited range and reliance on reacting to Swayze than being able to carry a scene on her own, she is clearly likable and suits the part well.  Swayze naturally nails the badboy-but-actually-sensitive stereotype, oozing charisma and obvious sex-appeal that’s made women swoon for more than twenty years.  Lets not forget though, that at times Grey looks good enough to eat in some sexy outfits that show off her toned body well.  Together they make for one of the more likable and convincing screen couples.  Supporting characters lack anywhere near the same screen presence however and are poorly writen, coming off more like caricatures than real people … with the possible exception of Baby’s father.  The story is also predictable and relies on quite a few clichés … but none of it really matters when everything comes together for what must be one of the most emotionally satisfying endings ever filmed.

The Blu-ray presentation is a mixed bag.  On a whole the movie looks acceptable despite the smokey soft-focus look many of the movies of the 80s were cursed with, and close-ups and night-time shots offer good detail and plenty of depth.  Sadly some of the daytime exterior cinematography remains flat and foggy.  A fine level of grain is kept intact however and there seems to be no sign of edge enhancement.  What pleased me the most however was the soundtrack, with clear dialogue and bass-filled,  sharp sounding music, which this movie has always lived or died upon.  Each musical moment certainly boomed out of the speakers and enhanced any scene they were featured in, which for this movie was invaluable.

Extras for this edition are exhaustive.  We have a career profile of the late Patrick Swayze, featurettes on the locations and interviews with much of the cast.  Add to this two commentaries, a trivia track, outtakes, deleted scenes and rehearsal footage as well as the DVD version and a 28 page booklet – and this is a must for collectors and fans alike.