Warning: May contain spoilers for [REC] #1

I absolutely loved [REC], a fresh take on the zombie genre that delivered tension, a claustrophobic atmosphere and genuine scares.  At the time the hand-held documentary style was getting a little old what with the likes of The Blair Witch Project and Cloverfield having done it before.  But this breathed new life into the concept and made for truly unnerving viewing. 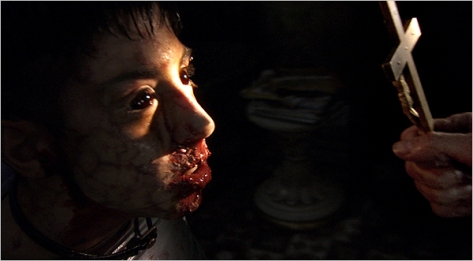 The sequel set apparently 15 minutes after that shocking ending (first timers really shouldn’t be reading this) where protagonist Angela was dragged off into the darkness at the viewpoint of her night vision camera.  We then join a group of SWAT cops as they are instructed to enter the building, now on lockdown with a mission to get in, clean up, and get out.  Yet as can be expected, things don’t exactly go to plan, and its not long before they are fighting for their lives.

It would have been easy for directors Jaume Balaguero & Paco Plaza to just copy the jumps and scares of the first movie and rake in the returns, but no, they have developed the concept to include multiple viewpoints from various characters, even picture-in-picture, all ranking up that feeling of helplessness and confusion – meaning when the shocks come, you will truly jump half a metre off your seat.  The first movie impressed because it ended up being about a lot more than just infected people screaming and attacking when the reporter and her camera man entered the closed off penthouse to discover evidence of demonic possession.  This movie then dramatically focuses on this and some moments felt like The Exorcist with possessed ‘infected’ speaking in a creepy voice and swearing.    I’ll admit I found much of it quite disturbing and although at times the chaos threatens to overwhelm the movie and often it was difficult to tell what was happening due to the darkness and the multiple viewpoints – the overall tone here was one of genuine fear – which few movies truly accomplish.

It may lack the gradual build up of the first movie and ultimately lose something due to its much wider focus, but this is a movie that hits the ground running, and doesn’t stop until you are completely worn out.  If you didn’t get a kick out of [REC], then this won’t convert you, but any fan of horror should seek this one out immediately.

Exclusive to the Blu-ray version is a near 2 hour documentary titled ‘An Infected World’ that sheds much on how the movie was put together, and makes for a fascinating watch.  The DVD & Blu-ray both feature extended and deleted scenes also.