I only have a casual awareness of the famed Millenium Trilogy by late author Stieg Larsson, and this first adaptation of the first book caught my eye after seeing many rave reviews.  Telling the tale of a missing girl and the disgraced reporter (Michael Nyqvist) who is hired to uncover the truth, this is certainly well told, gripping stuff, and as he investigates a shady high-profile family, uncovering a dark past – a street-wise computer hacker with a troubled past of her own befriends him and helps him piece together the clues. 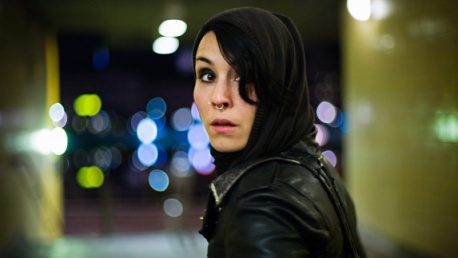 Expertly directed by Niels Arden Oplev and with a stand-out, tragic performance by Noomi Rapace as computer hacker Lisbeth Salander, this has a thoroughly gripping, complex story full of twists, turns and heart-in-mouth moments, that while unflinching and at times disturbing, kept me literally on the edge of my seat.  It’s a long movie but never did it drag as the story has plenty of detail and with glimpses of both leads past to add further depth, I couldn’t dare look away for a second.  With some stunning cinematography showcasing the grand Swedish wintery-locales as well as stylish direction and a suitably exciting score, this is a movie that just keeps on giving, all leading up to an ending that is both emotional and satisfying.

It would seem on this evidence (and that of acclaimed vampire flick Let The Right One In), that Sweden is becoming the new France for well made, accomplished movies … and I simply can’t wait to see the next in the trilogy, The Girl Who Played With Fire.