Although an avid fan of animation, especially Disney and Pixar, I also love far eastern ‘anime’, and first got a taste for it with the highly regarded Akira.  But as I’ve mentioned before, the movie’s of famed animation house Studio Ghibli don’t go for cyber-punk bikers or gun-toting femme-fatales, but rather heart warming family stories with more than a touch of magic.  I’ve now seen three of the studio’s movies, having previously enjoyed both the Oscar-winning Spirited Away and the cult-classic Princess Mononoke.  But this one, although in the same art-style and with much of the same talent behind the scenes, offers a more wholesome, mainstream story, with only a glossy shimmer of other-worldy Japanese oddness that blighted those other two. 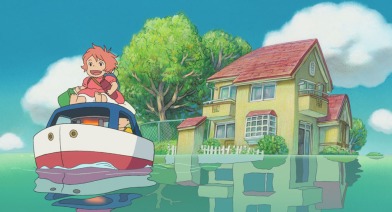 Ponyo is a fish that escapes her over-protective father under the sea and befriends a young boy, who nurtures her and before long she is transformed into a little girl.  Yet the father wants Ponyo back where she belongs and brings forth all the creatures of the sea to aid him.  Will the two young children stay together?  What is happening to the ocean?  Will Ponyo survive out in the human world?  Hayao Miyazaki’s spin on The Little Mermaid is heart warming and exciting, and filled with ‘awww’ moments that never get too sickly, and the simple story is packed with humour and wonderous imagination.  One stand-out scene has Ponyo escaping the underwater world and being reunited with her human friend, and it’s uplifting and breath-taking.  Throughout, the movie is awash with colour and personality, which shines even more on Blu-ray, and the relationship between Ponyo and the boy, and the boy and his mother are all very well done and heart-warming.  The orchestral music that accompanies the movie is also brilliantly implemented with a memorable theme.

This is one of those movies that on the surface appears aimed solely at children (which was my initial reaction), but its message, magical atmosphere and overall entertainment factor means it should have all ages swept up in it’s charm.  Oh, and the end credits song will stick in your head for days!