This really messed with my head when I first watched it on cinema. A clever, intricate exploration of time travel, apocalypse and madness starring Bruce Willis as reluctant ‘volunteer’ James Cole who in 2035 is offered a chance to go back in time and discover the cause of a deadly virus that wipes out 99% of the human population.  Yet of course things are never that simple, and on first appearing in the past, he is placed in a mental hospital where he meets unhinged rich kid Jeffrey Goins (Brad Pitt), who may or may not be connected to The Army Of The 12 Monkeys, strongly believed to be the cause of the outbreak.  Cole comes under the watchful eye of psychiatrist Kathryn Railly (Madeline Stowe) who sees more in him than a wild, violent mad man. 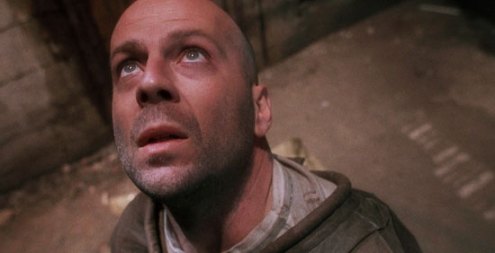 Terry Gilliam’s complex film is for me the best interpretation of the time-travel theme, with a wholly believable premise and some striking imagination at play, especially when the film tries to f*** with you and you start wondering if really the future is just all in Cole’s head and maybe he is nuts afterall – or is he?  I lap this kind of stuff up, and on say my fourth or so viewing it’s not as baffling as I first thought, and comes together perfectly by the closing credits – making this one of the best structured movies I think I’ve ever seen.  Add to this Gilliam’s incredible imagery, depsite a small budget, and three stand-out performances from the principle actors – and this is easily one of the best movies of the nineties.

The blu-ray is a mixed back.  Some times it looks striking and detailed, then other times it seems overly soft and out of focus, and even suffers from possible print damage (especially evident in background details).  Thankfully the image seems mostly free of artificial enhancements, but overall this is a movie that is in depserate need of remastering.  Thankfully the DTS HD Master Audio soundtrack fairs much better and is punchy and effective throughout, with dialogue especially clear.  Extras are carried over from the original DVD release, such as the fascinating documentary, and an invaluable commentary from Gilliam and producer Charles Roven, and we also get a photo gallery and a trailer – none of which are in HD.    Again then, another classic movie let down by poor hi-def treatment.