With the UK box set done and dusted, I felt something important was missing… 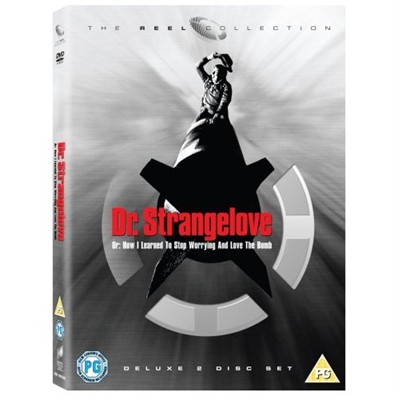 The oldest film I have seen of director Stanley Kubrick’s much admired career, and certainly one of his most gripping.  Telling the all too relevant tale (today as much as when the film was released) of the chaos and confusion that breaks out after a nuclear strike is ordered on the Russians by the U.S. military.  A formerly respected Brigadier General (a scenery-chewing Sterling Hayden) chooses to order the strike, despite having no reason other than his own insane ramblings, and the President; a committee of military hierarchy; a crazed German scientist and a war-hungry General struggle to figure out what to do in the possibility of total global annihilation.

Kubrick’s satire of the nuclear threat and the arms race in general is at one point frighteningly believable and at another, totally obsurd.  Legendary comedy actor Peter Sellers is on top form in 3 very different roles, and would certainly be the star of the show if it wasn’t for George C Scott’s brilliantly manic performance as the war-hungry general.  Kubrick’s mocking-observation of putting such terrible weapons into our hands is obviously the message here, and we can’t really believe it will end well. Yet whilst we wait to see just how it all plays out, we can’t help but be transfixed.

Regarded by critics as a comedy, I found this only slightly amusing, but understood where said critics were coming from – the situation, and how the key characters handle it is where the humour lies, but its subtle and intelligent enough to not fall prey to slapstick or cheap gags.  I must add too that Kubrick’s imaginative choices of camera work and production design shine throughout.

I picked up the Reel Collection edition of this film, and it’s presented in a gimmicky (but no less cool) slip case housing an imitation film-reel tin.  Inside are 2 DVDs, and we also get a set of art cards for our trouble.  The film, although showing its age with a rather grainy picture is in 1.66:1 anamorphic wide screen with 5.1 Dolby & DTS sound…and although the film which is mainly talking, this still impresses.  The extras consist of several documentaries, one about the making of the film, another about Peter Sellers, and another about the nuclear threat relevant at the time (and scarily, still now).  We also have interviews with Peter Sellers & George C Scott, filmographies, a photo gallery and a trailer.  Impressive.