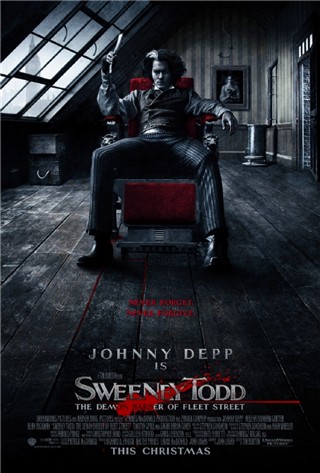 Just from this poster alone…I have high hopes for the new Johnny Depp / Tim Burton vehicle ‘Sweeney Todd’….as a big fan of the director, and loving the likes of Beetlejuice, Edward Scissorhands and especially Sleepy Hollow….I wasn’t exactly attracted to his adaptation of Charlie and the Chocolate Factory (a bit too ‘bright’ for ol’ Burton, me thinks)…so this looks like a return to his routes…unless that is, they are basing it on the ‘musical’ and not the legendary horror myth…pls keep this creepy and dark and spooky, and with a Danny Elfman theme throughout!  🙂

Update:  OH NO!!!  It is based on the musical (SOB!), and a Tim Burton first, the music is done by someone called Stephen Sondheim….shudder (but I’ll let him off, as he’s the guy who did the musical).  Suddenly I’m not so excited!!!  😦

2 thoughts on “Tim Burton back to dark & sinister?”